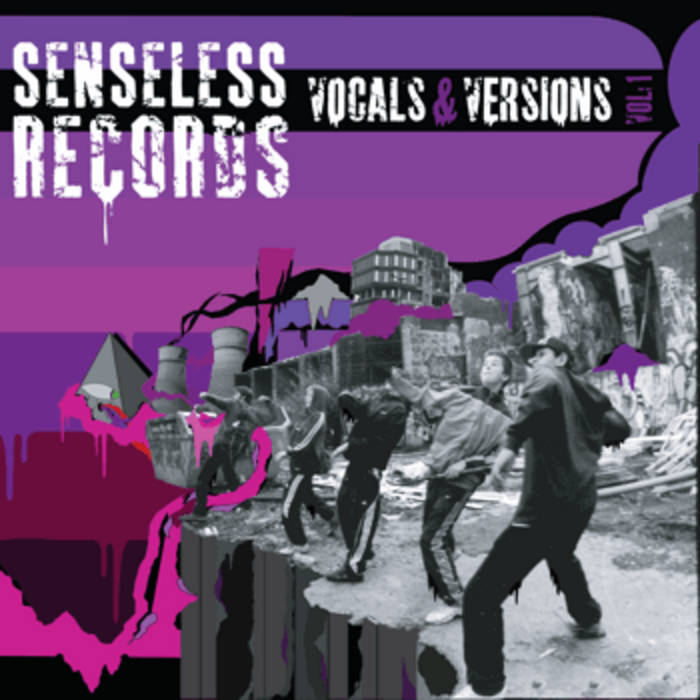 FACT Magazine "Undeniable quality evident from the get go"

RSD/Rob Smith (Smith & Mighty/Tectonic) "Thanks so much.. what a great collection!"

Laurent Garnier (FComm/The End): "This is absolutely brilliant. I have been playing a lot of Dubstep lately and you can be sure that I will hammer these tracks everywhere."

The product of almost a year’s work Senseless Records are proud to present their first CD project; Vocals and Versions Volumes One and Two. What started out as an idea for a 12” vocal EP has escalated in to a major project which will now be released on two separate CDs, two vinyl EPs and digital download. The album features 100% original and exclusive dubstep, dancehall, grime, bassline and garage vocals and versions from a kaleidoscopic range of worldwide talent including: Warrior Queen, Foreign Beggars, Starkey, YT, MRK1, King Cannibal, Billy Nasty, Jimmy Luv, Kanji Kinetic, Bongo Chilli, Bunnington Judah, Crunc Tesla, Jack Sparrow, Octapush, Bombaman, Rekordah and more. The tracks started out based round a collective of artists in Leeds, UK, but now include artists from all over the world including New York, Sao Paolo, Kingston, Lisbon, Martinique and Canada.

The albums are based on vocal tracks from the Senseless Records producers; Sarantis, DeVille, Sasquatch and Ghosttown in collaboration with the regular Senseless family and new friends from all over the world, made whilst putting this project together. After ten successful vinyl releases these are the first CD releases and are like a best of the label to date; there are fresh remixes from Starkey [Planet Mu/LoDubs/Trouble and Bass] and King Cannibal [Ninja Tune] of the label’s biggest vocal tracks to date with Warrior Queen, 2004’s ‘More than Money’, and ‘Retaliate’. There are also new versions of tracks recorded up to six years ago, including Justice Dub, originally a reggae dub cut by Sarantis to play on The High Pressure Sound System in Leeds featuring their MC, Urban Vox. The label grew out of the rich Leeds soundsystem culture which dates back to the late seventies and is one of the most diverse and exciting in the UK, giving birth to artists ranging from Nightmares on Wax through to LFO and of course the Iration Steppas.


The incredible bass weight of Iration Steppas was a major source of inspiration for Sarantis, Sasquatch and DeVille who co-run the label (now from London/Brighton, UK), all three have been regulars at the now legendary SubDub since it started back in the late 90s. The three of them come from diverse backgrounds including time spent making and playing everything from punk through to techno, hip hop, dub, speed garage, jungle, hardcore and most things in between.

A diverse set of influences, but what unites them is a love of all shades of bass music from the UK and beyond and combining elements of all the genres above in to something fresh. For that reason it’s hard to pin down the sound of the CD except to say it’s exciting, vital and bursting out of the sleeve with energy and ideas. There’s obviously a strong dub, reggae and dancehall influence on the Warrior Queen tracks and on tracks from UK dancehall don YT, on a political paranoia flex (Hidden Agenda); several with long time Senseless collaborator and Iration Steppas vocalist Bunnington Judah (Warzone, One Day Rebel Woman); UK dub legend Oova (Shallow) and the fiery Bongo Chilli (My Address) well known for his work with everyone from Bounty Killer to Daddy Freddy. The dubwise Fall In Love by Sarantis also deserves a special mention as one of the label’s most requested tunes for release, featuring new UK soul talent miss Honey Brown. Techno and electro heads the world over will know Billy Nasty but his dub-tech take on Warzone was a tasty surprise when it hit our inbox. There are hip hop and grime influenced tracks from Senseless resident MCs Asher Don and Dialect, spitting fire on Nitroglycerine, which comes with a dynamite MRK1 (Contagious/Planet Mu/Rephlex) remix, Sasquatch’s Scary and Hangman as well as London’s Sick Sense Crew who get wild on the futuristic robo-step of Sarantis’ Focus the Ghosttown produced What Goes Around Comes Around and a CD release for the 2006 DJQ/Cameo favourite ‘BussYaHead’. Then of course there’s the UK’s foremost hip hop crew Foreign Beggars who have cooked up something really special with Stay Seated on Sasquatch’s icy dubstep/grime hybrid beat. Fresh left of centre wonky hip hop comes from Rekordah also on his remix of Scary.

One of the most exciting things about the albums are the international collaborations including Jimmy Luv, one of Brazil’s best loved Dancehall MCs from Sao Paolo who’s hooked up with DeVille on the baile funk/dubstep hybrid Quente Demais, that one comes with a truly hot 4x4 rave stomper of a remix from Kanji Kinetic (Trouble &Bass, Rag and Bone). Also rapping in her native Portuguese is Red Bull Academy winner Violet from Lisbon, her collaboration with DeVille is bass heavy fusion of heavy percussive beats, sharp tongued lyrics and lazer guided arpeggio bass. That track is also remixed in to a future 2-step carnival party by Octapush, one of our favourite new international producers fresh from remixing Buraka Som Sistema. Elsewhere DeVille and Sarantis travel to Martinique with MC Sunkilla on the raw, uncompromising Boom and Sasquatch goes to New York to hook up with esoteric legend Crunc Tesla who has collaborated with Q-Bert, Anti Pop Consortium, Mos Def and was described by Institubes’ Teki Latex as the, “techno Kanye West” (Kanye is even reported to be a fan!) Last but not least there’s a nod to 2-step, garage and early 2000s dubstep from DeVille in collaboration with Austin, TX’s Tyrant (Weight, 10Bag, Pressing Issues) on their remix of Rubies by the up and coming Harper Lake and on his remix of Mary Anne Hobbes’ favourite Prod on No Frills.

The CD itself is 100% Carbon Neutral and comes in a deluxe digipak case made from recycled materials and features hand drawn artwork from renowned Bristol, UK, graffiti artist Song.